The Timetable
The latest information we have is that following receipt of the Inspector's Final Report on the Examination of the District Plan, an Extraordinary Council meeting of EHDC has been arranged for Tuesday 11th September, at which the District Council will be asked to adopt the Plan. The agenda will be available on the EHDC calendar of meetings web page in the week preceding the meeting.
Once adopted there is a three-month pause to allow any possible applications for a judicial review. This implies that planning applications cannot be considered before early 2019

Visitors were encouraged to leave their thoughts and comments. As a result of this, the town council made a submission on behalf of the town to EHDC. Individuals were also encouraged to make their own comments.
The major outcome of this was that instead of having 500 houses planned for one site, the allocation was split into the three sites that are currently under consideration.
Officers and Members from the town council also had a meeting with EHDC on 25 August 2016 and were present and made submissions to the Planning Inspector on 08 November 2017.

At the direction of the members of the Town Council, this letter has been sent to the Secretary of State for Housing, Communities and Local Government 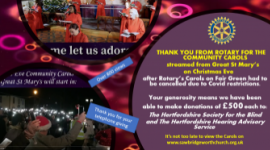 Thank you to Great St Mary's Church and all who filled the gap left by the cancellation of Rotary's Carols on...